Are numbers man made or universal ?

Can numbers describe, the formless, or are they restricted to form ?

Through numbers can we describe the world of form ?

Where did zero come from ?

Where did Infinity come from ?

Are zero and infinity numbers ?

Whenever we describe, compare or contrast something or idea, we use some form of  picture, word or symbol. When we begin to understand the meanings of particular symbols then we have the beginnings of a system or language.

Numbers are simply a type of language used to describe, compare and to contrast properties of different things.

Eliphas Lèvi says in his “Histoire de la Magie“: “The absolute hieroglyphical science had for its basis an alphabet of which all the gods were letters, all the letters ideas, all the ideas numbers, and all the numbers perfect signs.

Meaning and Philosophy of Numbers

Bosman states that ‘numbers are symbols of the beginning and development of the universe, of a solar system, or a series of such, or, indeed, of any rhythmic movement. The terms with which we have to deal in considering the science of numbers are figures, symbols, ciphers, arithmetic and mathematics.

As numbers describe the differences and the degrees of separation, then we can conclude that numbers are only indicative of the world of form and its manifestation.

We can easily prove the limits of numbers by the process of addition.

and so on. We can always add one more number. So imagine the largest number that we can imagine. Let’s call it n.

We can always add one to n.

And so the new largest number is n+1.

As this continues then we will tend towards Infinity. A number which is limitless.

We can do the same process backwards and produce –n-1, which will tend towards minus infinity.

So we find that any number scale is found within the limitless, that which we cannot understand or comprehend.

Lets now look between the numbers……

As you can see, we can continue to divide by a half until we eventually arrive at 1/infinity.

So not only does infinity stand at the beginning and the end of any number sequence, it also lies in between every number.

“all things are numbers”

Pythagoras himself spoke of square numbers and cubic numbers, and we still use these terms, but he also spoke of oblong, triangular, and spherical numbers. He associated numbers with form, relating arithmetic to geometry. His greatest contribution, the proposition about right-angled triangles, sprang from this line of thought:

“The Egyptians had known that a triangle whose sides are 3, 4, 5 has a right angle, but apparently the Greeks were the first to observe that 3²+4²=5², and, acting on this suggestion, to discover a proof of the general proposition. Unfortunately for Pythagoras this theorem led at once to the discovery of incommensurables, which appeared to disprove his whole philosophy. In a right-angled isosceles triangle, the square on the hypotenuse is double of the square on either side.

This shows how Pythagoras’ formulation immediately led to a new mathematical problem, namely that of incommensurables. At his time the concept of irrational numbers was not known and it is uncertain how Pythagoras dealt with the problem. We may surmise that he was not too concerned about it. His religion, in absence of theological explanations, had found a way to blend the “mystery of the divine” with common-sense rational thought.

From Pythagoras we observe that an answer to a problem in science may give raise to new questions. For each door we open, we find another closed door behind it.

What are  incommensurables ? Pythagoras created a religion around the perfection of numbers and how they all simply and neatly fit into each other. This can easily be seen by,

But when Pythagoras noted that in his famous theorem, if a and b are 1, then c= root2.

Root 2 is not a fraction and is actually a non-recurring fraction,

These numbers that have no ending cannot be found exactly. Just when we think we are getting closer they continue to elude us.

All that I can see from these examples is that no matter how hard we try, we will never be able to fully describe or understand the true nature of the manifested nature.

The numbers are only abstract, they are defined by the medium which supports them.

They are creatures of form.

The world of form can only be described and understood by other forms.

Only, when we meditate can we begin to let go of the world of forms. Forms include all things, all ideas, all thoughts and time itself.

During meditation, we begin to let go of our connection to the outer physical world. As we go deeper, we begin to loose the sensation of our bodies and we begin to dissolve further. Mantras, can help us to go even deeper, but by their very nature, they are forms and so cannot give us freedom from forms.

In order for us to become even freer, we need help. We can be given a connection to the Light and Sound Energy, which makes the Universe and Time. Here we can begin to discover the nature of The Universe and how it comes to be. But even here we are still trapped in the world of Duality, Form and Time.

How then can we become free from Duality, Time, Form and the Cycle of Life and Death ?

Again we need assitence to transcend these limits.

1meditation has thousands of people who have transcended these limits and found this Freedom from Duality. You can meet them and talk with them about their journeys. You can find out how you too can have this freedom.

This Freedom is for all, who choose this Path.

It can all start with an intoduction course or a Personal Manra Day.

Through continued meditation we can be that which supports the world of numbers and form. We can not understand or describe it fully with our minds. 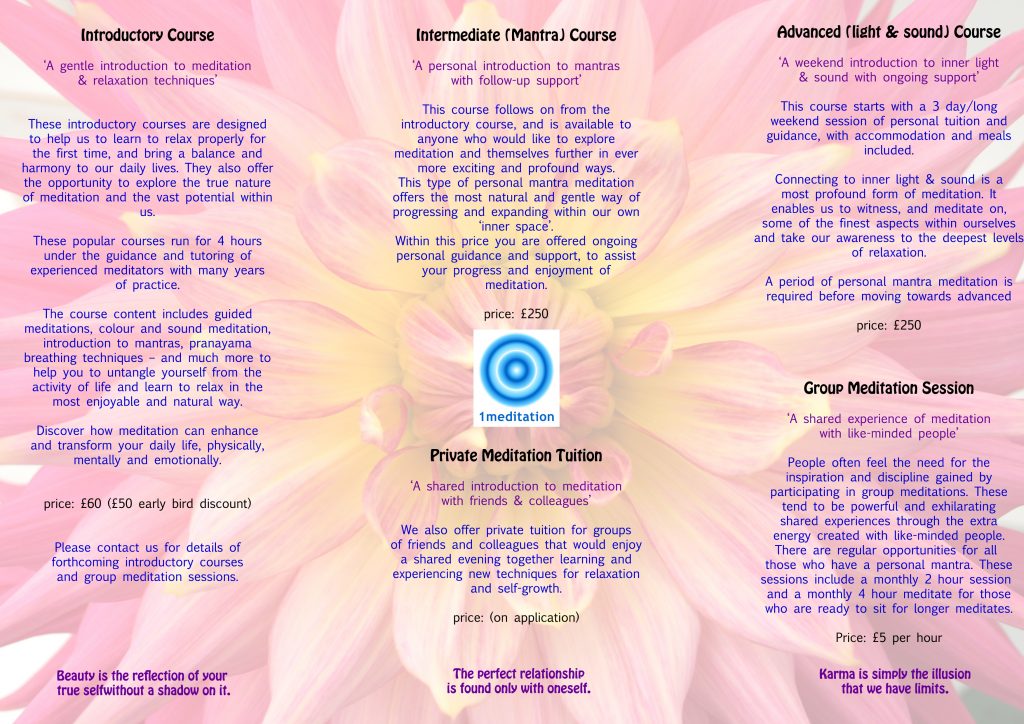